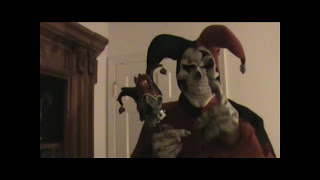 Even though Halloween is almost over on the East Coast of the United States, I still wanted to highlight a short film one of my coolest friends made a year ago. Called HALLOWSCREAM, Siko Mike created a short that was inspired by his love for all things horror and his obsession with Batman [especially the Joker]. Directed and written by Siko Mike, he also stars in it along with his younger brother, Josh Huntley, and their friend Ray Perry.

Fred and Jason are best friends, but totally opposite people. Fred always seems to find himself in trouble. Jason however doesn't approve of Fred's mischief. On Halloween night, the two teens decide to trick or treat at the crazy neighbor Psycho Mike's creepy house. Jason gets angry at Fred and leaves. Fred sees a house that appears to be empty with a bowl of Halloween candy on the front porch and nobody around. While stealing some of the candy, Fred notices that the front door is wide open and decides to just walk in and see what he can take. What Fred doesn't know is that the residents of the house are not Human, but monsterous homicidal clowns that eat trick or treaters that just so happen to come to their home on All Hallow's Eve. The season of fear is back this Hallowscream!

While this micro-budgeted film isn't perfect - some static shots linger way too long and the editing and audio sometimes aren't leveled enough - there's still a lot to like about it. The Jester is pretty funny and the actors seem to be having fun, which is what's important. Please check it out and show some love to indie filmmaking.