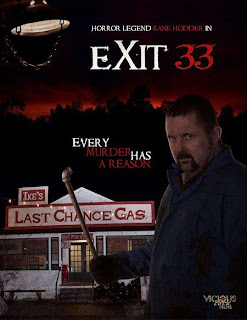 
PLOT
A group of friends have a five-year high school reunion planned. As they travel to the location of this reunion, each friend takes a pit stop at the Last Chance Gas station owned by Ike (Kane Hodder), which is known for its home made beef jerky thanks to hunters in the area. What these hunters don't know is that the "beef" jerky is made with a special ingredient - an ingredient only these friends can supply. It seems Ike's lost his wife in a shooting accident, causing him to kidnap female clients and remove their eyeballs. Ike will also kill those who figure out his hobby, proving that high gas prices aren't the worst thing that can happen to any driver.

I have three words for EXIT 33: 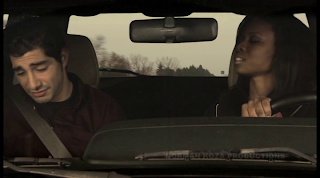 ed another film to distribute because EXIT 33 isn't worth the trip or the pit stop to see it. It aims itself to be an old school type of horror film, but I feel it just falls flat on its face.

EXIT 33 is a mix of a slasher film and a psychological thriller. However, it doesn't really succeed in either sub-genre. The slasher deal doesn't really work because we know right from the start that Ike is the killer, losing any sort of mystery or suspense. He also doesn't really stalk his victims, instead tricking them by sending them to faulty gas pumps in order for their car to break down and initiate his attack. And even though we do have a Final Girl [sort of], her characterization doesn't really hold up to the standards of what we look for in that type of character.

As for the psychological thriller aspect, the film isn't thrilling at all. In fact, it's absolutely repetitive with the same situation playing out four or five times within the span of an hour. A female stranger enters the gas station, Ike tells them Pump 9, she uses Pump 9, car breaks down on the road, Ike trails her, offers to help, and attacks her. Rinse and repeat over and over again. Instead of waiting for the next kill, you're bored looking for something out of the ordinary. The only interesting thing about the psychological aspect are the flashback scenes with Ike and his wife that reveal what drove Ike to do what he currently does and why he continues to see the spirit of his wife with a missing eye. Other than that, there's not much really going on with the story that ought to keep much of your interest.

The characters in the film aren't developed at all really, save Ike. Most of the characters, especially the female ones, come across as bitchy and conniving, making you want Ike to torture and murder them horribly. Also, the Final Girl character, Angie, doesn't get much screen time to begin with and only really appears in the Final Act of the film. Even then, she doesn't have much substance other than wanting to survive Ike's wrath, save her annoying friend, and use a dirty bathroom without putting toilet paper on the shitty, or bloody, toilet rim. Angie's boyfriend, Matt, is also pretty likeable, but he doesn't do much to really move the story forward.

Ike, by default, gets the most attention because he's the killer who's dealing with some trauma issues. He's a gas station owner. He's a hunter. He's a father. He makes beef jerky 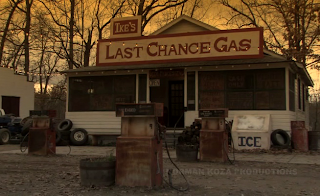 . He sees his dead wife. He likes pulling out eyes and punching women so they can stop screaming. He can also take quite a beating and not even flinch, which takes away a lot of the suspense and tension in terms of defeating Ike. Also, how does Ike lead a normal life for years while killing people, yet no one seems to notice them missing or all the deserted cars left on the road? It's kind of implausible. It's an interesting concept for a film but the execution is very flawed.

DIRECTION - Tommy Brunswick seems like a genuine horror fan who wants to make a good feature film, but EXIT 33 could have been a lot better than it was. Like I mentioned earlier, there's barely any tension or suspense. The film isn't scary at all. The editing was okay, but the pacing was off due to the film's repetitive nature, making the 83 minutes feel twice as long. A lot of the scenes felt like their purpose was only to promote the music that plays through the film by local indie bands. There was also a funny moment where two characters are driving to the gas station, but the background is obviously a green screen effect. It reminded me of that scene in AIRPLANE! where Rex Kramer drives to the air tower and there's a bunch of funny scenes going on behind him due to a green screen. I realize the film is low budget and it's hard to do a driving scene like that without the right equipment, which costs money. But if you know you can't do that, don't make your film look cheaper than it actually is. Either cut the scene out of the film, or have them have a conversation outside of the car. This is both a direction and screenwriting flaw in my opinion. It's obvious Brunswick knows how way around films, but EXIT 33 is just a bad movie and not at all interesting visually.

EDGE FACTOR - EXIT 33 has a decent amount of gore. We get animals getting cut open in montages. A girl has her back skinned. Several eyes are cut out of victims. We get stabbings, shootings, and necks getting broken or sawed off. It's one of the two reasons why EXIT 33 isn't a total bomb. For a low budget horror film, the gore was pretty good. As for language and sexuality, both are pretty tame for the most part.

ACTING - Kane Hodder is really the saving grace of EXIT 33. While his character could have been written better, Hodder does what he can with the material and creates the only sympathetic performance in the film. Yes, he's the villain of the film and he's not a great guy. But seeing him portray a family man in the flashbacks really helps Hodder give Ike a two-and-a-half-dimensional performance. It's not the greatest acting anyone has ever done, but considering the other performers in the film, I'll take what I can get. As for the other actors, some were better than others. Antoinette Nikprelaj and Jerry Reid were okay in their respective roles. Everyone else either annoyed me or didn't really do much to impress me.

THE FINAL HOWL
EXIT 33 was truly a disappointment. I am a fa 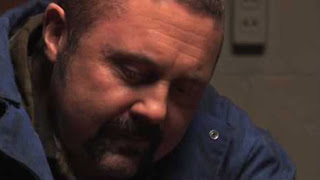 n of Kane Hodder and his previous work, and this film didn't do him much justice at all. The story isn't great, the direction is boring, and the acting is hit and miss. At least the gore was more than adequate and Kane Hodder performed well. If you're a Kane Hodder fan and want to see him murder stupid characters, then EXIT 33 is possibly worth your time. Otherwise, just make sure your tank is full so you won't have to make a stop here at EXIT 33 where you'll be watching Ike...