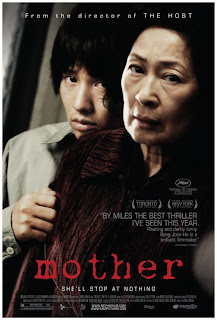 
This film discussion/review is for The Hunter College Film Blog [which is the blog for the college I'm graduating from this month - yay!]. There's a film of the month and the writers for the blog usually take the time to watch the film and give their thoughts on it. It's not one of my normal reviews, but since I contributed to it and wrote my thoughts on MOTHER, then I'm considering this my 388th review. So click on the link and read my thoughts on this fantastic film.

Available on Netflix Instant Watch
Posted by Fred [The Wolf] at 4:32 PM