Mutant Vampire Zombies From The 'Hood (2008) 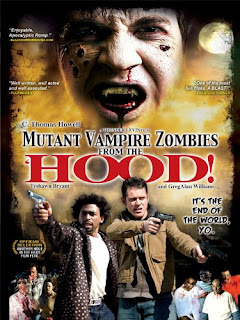 
I spent quite some time in the 'hood, being from Brooklyn, New York. I've seen gang violence. I've seen drug dealing. I've seen some bad stuff go down. But never...and I do mean NEVER...have I've witnessed mutant vampire zombies in my 'hood.

Unless you count stoners. Then yes, I have seen MUTANT VAMPIRE ZOMBIES FROM THE 'HOOD. Anyway, read the review before I pop a cap in yo' ass, homey!

PLOT
In South Central, Los Angeles, a cop named David (C. Thomas Howell) and his partner hide out at the rafters of a warehouse where two rival gangs are meeting. The leader of the black gang, G-Dog (Tyshawn Bryant), wants to exchange drugs with the Asian gang leader, Dragon (Robert Wu), for his girl Latiffa (Rachel Montez Collins). The police bust goes bad, as David and his partner are outnumbered. While a shoot out occurs between the three groups, a huge solar flare hits Earth. Everyone in the warehouse is knocked unconscious because of it.

They all wake up hours later, only to find that the world has drastically changed. The solar flare seems to have mutated anyone in contact with it [meaning whoever was outdoors during the event] with its radiation, turning them into flesh-eating, blood-hungry zombies. The three rival gangs unite to take out this new species as they head to the safety of an astrophysicist (Gregory Allan Williams) and his really hot daughter (Johanna Watts), who seem to have the key to stopping these creatures and staying alive. 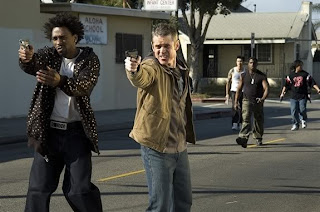 Now you may all be thinking: "With a title like MUTANT VAMPIRE ZOMBIES FROM THE 'HOOD, this film must really suck!", right? Fortunately, MVZFTH is actually a pretty good flick! It's funny. It's well-acted. And for a very low budget feature, it looks pretty damn cool! Who knew?

The screenplay for WVZFTH is surprisingly smart and well-written in general. Obviously, the film isn't original in its storytelling. If you've seen NIGHT OF THE LIVING DEAD or other popular zombie movies, you know how things supposed to go.

B: A group of survivors who don't see eye-to-eye encounter these creatures, wondering what caused them and doing anything in their power to live.

C: They all group up in a safe place, disagreeing with how to do things to maintain their survival.

D: The creatures break into this safe place, putting the survivors' alliances to the test.

MVZFTH runs the same way, pretty much. It takes elements of NIGHT OF THE LIVING DEAD, mixed with NIGHT OF THE COMET, with an added sprinkle of 28 DAYS LATER to complete the stew. And it actually works for the most part. Not only are these films referenced, but so are NOSFERATU, ALIENS, and SNAKES ON A PLANE to various degrees 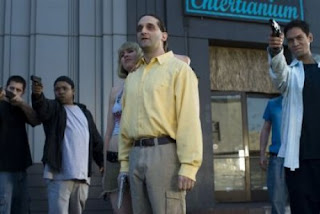 of success. In fact, the Larson character [G-Dog's right hand man] is the Bill Paxton role from ALIENS, who's always terrified by the situation and rants about horror movies to express his points. These self-references shouldn't work as well as they do, but I found myself laughing at most of them. Color me surprised.

The dialogue is also pretty well written. The comedy is actually funny and there's hardly any exposition. When characters say something, the words actually move the story forward. There are also moments where stereotypes are thrown at certain characters, playing around with them to a great and comedic effect. The screenplay was really well-paced and I never felt all that bored once the zombies showed up within 20 minutes of the movie. I will say that the characters aren't all that developed and it would have been nice to know more about them so, as an audience, we could care about them and their fates. A little more depth would have been nice but it doesn't really hurt the film all that much at the end.

The special effects of MVZFTH are more than decent. The SFX and makeup were done by American Makeup and Effects, who have worked on all three PIRATE OF THE CARIBBEAN films and JARHEAD. The zombies look pretty good and the gore is pretty nice as well. We get a lot of gun shots and necks being bitten by zombies. Not too shabby at all. For a low budget movie, it was nice to see that the money was spent on the right things.

The direction by Thunder Levin was also nicely handled. The movie was well-paced with its tight editing. The cinematography was pretty nice. The fight sequences were nicely choreographed and pretty exciting. They weren't perfect but I enjoyed them. I really can't say anything negative about the visuals in this movie. The film looked really good and also sounded really good. Thunder Levin is no hack, that's for sure. Definitely thumbs up from me.

The acting was also decent for the most part. C. Thomas 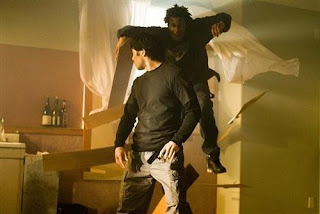 Howell does more than well here as the lead. I've always liked the guy since the 1980s and it's too bad he doesn't have a better career. He's a talented actor and I enjoyed him here. His moments where he would try and act black reminded me of SOUL MAN, which made me nostalgic. Tyshawn Bryant was more than capable as G-Dog. He was the stereotypical black gang member, but he put more depth into a thinly written character than what was needed. Good job. Robert Wu was also good as Dragon. He had certain emotional moments that he handled well. KeiKabou Holland was a highlight as Larson. His rants about NOSFERATU were very funny and he made the film more entertaining overall. Gregory Allan Williams, or Baywatch fame, brought class to his role. Johanna Watts as Lisa was extremely hot AND could act! That only made her sexier in my book. And Maxie J. Santillan Jr., as the old man who acted as the sage for the group, was entertaining as well. Just a really capable cast. Not one weak link here.

- David's partner criticized him for talking and acting "black". Obviously, he was one of the many people who was smart enough NOT to see SOUL MAN back in the 80s.

- David claims that his job as a cop is to know every criminal on the streets by their names. Yeah, if there are no donut shops or plungers around! However, if you like forceful entries in the rectum region, then please ignore this one.

- G-Dog said the zombies can do everything but "skull fuck" people "with their atomic dicks." I totally agree. Only Lois Lane has knowledge of this experience and it should stay that way.

- Lisa is a great marksman. Any chick who can master a gun goes on top of my list...and my lap.

- None of the survivors want to have sex with zombies, afraid their appendages might be mutiliated because of hunger. Although lesbians probably welcome their carpets being munched...

- Larson got his penis bit off by a zombie. I guess someone needed a penis transplant...

- Lisa has a thing for David and vice-versa. Hot chicks dig THE OUTSIDERS, even if their 15 minutes of fame have already run out and then some. 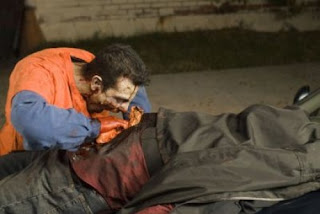 While not a perfect film [the ending was way rushed, some plot holes, and a very slow and unoriginal beginning], MUTANT VAMPIRE ZOMBIES FROM THE 'HOOD is still a surprisingly fun time. If you are interested in seeing this film and want to see how a low budget zombie film should look like, check out their website at Seminal Films. Apparently there is another installment called NINJA PIRATE WEREWOLVES IN 'SPACE - a film I'm actually looking forward to. How can you not with a title like that? But in the meantime, take a look at MVZFTH. It may leave you starving for more.