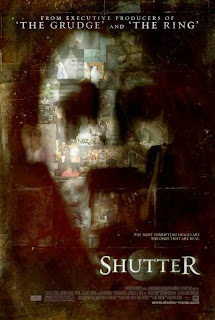 
PLOT - SHUTTER, an Americanized remake of a Thai film of the same name, begins with the wedding of photographer Benjamin Shaw (Joshua Jackson) and English teacher Jane (Rachael Taylor). Ben has received a job in Japan, where he's worked before, so the couple decide to honeymoon there. One night, the couple hit a woman on the road, causing them to skid and crash into a tree. When they wake up, the woman is nowhere to be found. Ben doesn't believe there was ever a woman there, but Jane isn't so convinced.

After a couple of days, they go to Tokyo so Ben can work. Jane starts looking at photos Ben has taken and starts seeing something strange: a white light that distorts the image. While Ben seems to dismiss this phenomenon, Jane decides to do some research. With help from Ben's assistant Seiko (Maya Hazen) and her boyfriend Ritsuo (Jason Kyson Lee), Jane learns about spirit photography - a supernatural occurence where ghosts show up in photographs to send a message. Jane believes that this spirit is haunting her and Ben and wants to know how to get rid of it. Unfortunately, secrets behind this spirit start to come out that could strain Jane's relationship with Ben.
REVIEW

STORY - Sigh. What can I say about SHUTTER? It's boring. It's derivative of other J-horror film remakes. It makes me want to put a pistol to my head and pull the trigger.
SHUTTER brings nothing new to the table except maybe a few white hairs and an ulcer.

Now I have seen the original film, which I thought was decent and kind of creepy. This remake is none of the above. The script, written by Luke Dawson, is pretty bland. Compared to the original narrative, it's not deep at all and dumbed down so pre-teens can shit all over themselves over the "scares" that aren't there. Plot holes galore - especially when it concerns this evil spirit. Why would she wait until Ben and Jane were MARRIED until messing with them? She could have done this while they were dating. Also, why start in Japan? By film's end, it's obvious she could travel all over the world. It just seemed odd that this vengeful ghost would wait until that particular moment in order to scare them. Also, there are hints that Ben may have had some affairs in his past and maybe had them while with Jane, yet they're brushed under the rug and never really followed on. I mean why would they be? Who's gonna care about a plot point like that, right? Oh, I'm such a silly boy.

I also found the character development to be really flat. For a guy who's worked alot in Japan, Ben doesn't seem to know much of the language. That Buena Vista coach really did a great job there! Also, he just seemed too shady to really get behind, predictably letting you know that he was the reason this spirit was haunting him and Jane to begin with. As for Jane, she was a real genius. I mean, the ghost gives her hints in the photos as to where to go to figure out the reason she's around. Yet, she takes these hints and wipes her ass with them because she ends up still wondering where she needs to be.

THE GHOST IS TELLING YOU WHAT YOU WANT TO KNOW, YOU STUPID BITCH!! UGH!!

And when Ben is having nightmares and freaking out a bit, Jane wonders what's wrong with him.
WHAT DO YOU THINK IS WRONG, YOU STUPID BIMBO??

It didn't help that she had to be blonde either. Sorry to all you blondes out there, but she just pushed the stereotype more than it should have gone. Lazy screenwriting from top to bottom.

I did appreciate that the ending was at least left intact and that the plot points leading up to it [the twists], while contrived, actually made some sense. And there was some attempt at something deeper than other similar films fail to do. But other than that, it's pretty much the same script used in ONE MISSED CALL or THE EYE [which also came out last year] but with photos used instead of a phone or optical transplants. Same shit, different film. It needs to end. Really, it does.

DIRECTION - Masayuki Ochiai, who's other work I have yet to seen, didn't do much to impress me here. There was some semblence of style and at times I liked the mood and atmosphere that he visually put into the film. But it was the typical "point-and-shoot" affair for the most part. If the script was stronger, I probably would have let that slide a bit. But the visuals needed to pop here and they didn't. Where's the tension? Where are the scares? The direction was just as lazy as the story.

VIOLENCE/SEX/LANGUAGE [aka THE GOOD STUFF] - It's a PG-13 horror flick. We get some red stuff. Someone's eye socket hollows out at one point. We see a corpse. There's an implied rape scene but there's no nudity from anyone at all. As for language, "shit" is probably the boldest it goes. Very tame horror flick. Bah!

ACTING - While hardly inspiring and great, at least it was decent. Joshua Jackson is a very good actor from his television work and with what he's given, he does a decent job with the Ben character. Too bad the character has no depth at all. Rachael Taylor, who was in SEE NO EVIL and TRANSFORMERS, is hot and has talent - too bad none of that is evident here. She screams well but she can't carry a film like this, especially when the script won't let her. And while I thought her character was stupid as hell, I did enjoy watching her. Everyone else did their part, although I wish John Hensley was in the film more. That dude creeps me out for some reason. Plus he can act too. What a waste of a decent cast.

MUSIC - Your typical J-horror score. Nothing to write home about.

THE FINAL HOWL
SHUTTER is way better than ONE MISSED CALL and a bit better than THE EYE. Then again, that really isn't saying a whole much. What can be said is that these remakes need to stop, especially when they take an interesting concept and just shit all over it so teenagers can gush over how "scary" these modern horror flicks are. Boy, am I glad I was born in 1981. Crappy story, crappy characters, no mystery, boring pacing - SHUTTER is not worth your time. I'm glad Jackson is on a hit show now and Taylor is doing stuff other than this because they're the only reasons to watch this. Stick to the original SHUTTER and avoid this one. The WTF? Vault has a special place for this one. And I won't be taking a picture - 87 minutes is long enough.