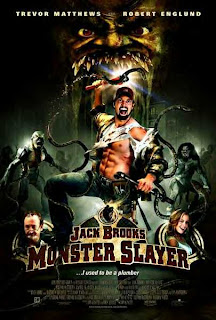 
PLOT - JACK BROOKS: MONSTER SLAYER is about a guy named Jack Brooks (Trevor Matthews) who has had a very traumatic childhood. You see, Jack was on a camping trip with his family when some monster jumps out of nowhere and eats Jack's mom, dad, and little sister. Jack, running away from the scene and being the only survivor, has grown up bitter and angry that he couldn't save his family. His psychiatrist (Daniel Kash) just makes him angrier. His snobby and bitchy girlfriend, Eve (Rachel Skarsten), doesn't help his situation. The only things that seem to calm Jack down are his plumbing job and his trips to night school.

Here, Jack meets his professor, Gordon Crowley (Robert Englund), who is a kooky chemistry teacher. One night after class, Crowley invites Jack to look at his pipes [get your mind out of the gutter!], which seem to be clogged or something. Jack attempts to solve the problem, but unwittingly opens up the ground outside of Crowley's home, releasing pure evil. Jack leaves, but this evil spirit invades Crowley's home and possesses him until he transforms into something that looks like Chet from WEIRD SCIENCE, only with tentacles this time. This demon can also possess other people to turn them into zombie-like demons. Can Jack make up for the past and save the day? What do you think?

STORY - This was a mixed bag for me personally. Let me just start off by saying that I really liked the screenplay. It goes from point A to point B to point C in the simpliest of terms. We understand Jack's struggle and why he's so angry. The whole "demon escape" thing was clever. The characters are nicely developed enough for us so we can relate to them in some fashion. The dialogue was good. JACK BROOKS has a really interesting and humorous script going for it.

My problem is that the story doesn't really go far enough with the premise. Especially when the first 50 minutes of the film is the intro portion, leaving maybe 20 minutes at the end for the actual monster slaying. It's nice that the screenwriter, John Ainslie, wanted to develop the characters, but when I'm expecting monsters getting slayed, I want to see them get slayed. The wait was a bit too much and too long. I get that Jack Brooks is an angry person. I didn't need like ten scenes to tell me that. The film should have just set it up fairly quickly and moved on to the monster portion. If it were a lesser movie that wasn't fun or interesting, I would have stopped watching during the long set-up. But at least the film was never boring, which it definitely had going for it. But more action-like scenes besides the end would have been cool with me. Oh well.

DIRECTION - Jon Knautz does a great job bringing this film to life. The SFX used were awesome [no CGI here - this film proves you don't need it all the time] and the cinematography was very nice. The editing was excellent and the pacing was a bit slow at the beginning but it definitely picked up towards the end. Knautz creates a fun and light mood amidst all the wacky shit that happens. It felt like an 80s film and that's more than alright with me. And were there some Sam Raimi-EVIL DEAD-like visuals in this flick, or was it just me? If you want B-movie goodness, JACK BROOKS is for you. And that couldn't have been possible without Knautz's direction. Well done, sir.

VIOLENCE/SEX/LANGUAGE [aka THE GOOD STUFF] - Well the closest you get to sex is dancing and making out. But the violence and the language make up for it. You definitely get your share of cuss words in JACK BROOKS, and when the violence happens, it definitely happens. Especially towards the end of the film when Jack Brooks must fight off demons and the possessed Crowley-Chet hybrid. We get some ax wielding and some pipe bashing and some head splattering. It's all good. The gore FX is pretty top of the charts here and I dug what was given to me.

ACTING - Trevor Matthews, who created and produced JACK BROOKS, does the title character very well. He's not as charismatic as Bruce Campbell, whom I'm sure was an influence, but he's definitely convincing in his angst and his transformation into a hero. Matthews is very energetic and is a great physical actor. Matthews could have turned Jack into a caricature of an angry person, but he takes the role seriously and we buy him as a normal dude with problems. The anger never takes over his life. It just frustrates him. And Matthews protrays that well. I would like to see him do more acting roles.

Robert Englund is also great as usual as Professor Crowley. Never one to hold back, Englund embodies the character, especially when he becomes possessed and transforms. It's a great physical and comedic performance that I really enjoyed. Score another one for Englund in 2008, as both JACK BROOKS and ZOMBIE STRIPPERS benefit for having the man onboard. And Michael Bay wants to replace him in that unneeded A NIGHTMARE ON ELM STREET remake? Fuckin' idiot.

The other actors were decent as well. Rachel Skarsten from Birds of Prey, in particular, was great as the bitchy girlfriend. God, I'm surprised Jack Brooks didn't manhandle that wench. She's the reason why I'm single. You're a better man than I, Jack Brooks.

MUSIC - Nothing really of note except to say that it worked well with what was going on in the film. So complaints here. Just don't expect Oingo Boingo to pop up or anything.

THE FINAL HOWL
JACK BROOKS: MONSTER SLAYER isn't going to be the next EVIL DEAD, but it's definitely a pleasant surprise in the stagnant smell of modern horror. If only the story had pushed the idea a bit further, we would have had a cult classic in the making. Still, I recommend a definite rental and if you like it, a purchase should be the next step. I hope this is the beginning of a new franchise because I would like to see more of Jack Brooks. Move over, Mario! There's a new hero plumber in town!
Posted by Fred [The Wolf] at 1:45 PM

Email ThisBlogThis!Share to TwitterShare to FacebookShare to Pinterest
Labels: 3 Howls