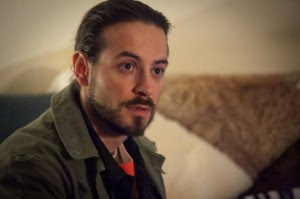 While I mainly do reviews on this fine blog, I also like to take time out to showcase independent filmmaking and the people who contribute in keeping horror alive for a lot of us. Today's spotlight is on a great guy, Dave Reda, who is part of Elftwin Films as the company's Director, Writer, Co-Editor, Co-Producer, and even stars in his own films! In 2006, Dave directed a feature horror film called BIT PARTS, that got some pretty positive reviews and can be rented from Netflix and any other rental service, as well as being bought on Amazon. Since the two of us are Facebook friends, he wanted me to promote his short films to get them out to a bigger audience, which I have no problem doing.

In 2010, Dave created a short horror-comedy called HORROR OF OUR LOVE: A LOVE STORY. Starting out as a typical scene in a slasher film, HORROR OF OUR LOVE then turns into a music video showcasing the killer's love for his Final Girl, murdering all of her friends and potential suitors to get her attention and prove his love to her. Supported by the band, LUDO, who provides the pretty comical, yet charming, love song for the short film, HORROR OF OUR LOVE is a great 6-minute short that takes the usual conventions we would expect in a slasher and turns them upside-down into something very sweet. In fact, the film actually won 8 out of 11 festivals it was played at. It's definitely worth a look or two.

Dave's newest short, MY UNDEADLY, stars Scream Queen Michelle Tomlinson and Dave himself as a member of the undead who terrifies poor Michelle until it's twist ending. The film holds quite a bit of nice tension and great camera shots, leading to a unique ending that I didn't even see coming. This 4-minute of awesomeness is currently playing in festivals, where I'm sure it'll win a few of those.


You can check out for more Dave Reda and his Elftwin Films production company at its website: Elftwin Films. He's even showcasing his work at this year's Shriekfest International Horror, Thriller, Sci-Fi and Fantasy Film Festival and Screenplay Competition on October 2nd in Sacremento, CA.

Let's show some support to Dave Reda by commenting on his videos and even liking Elftwin Films on Facebook and following the company on Twitter. Keep horror alive by starting where it originated from - the indie scene. Good luck, Dave!
Posted by Fred [The Wolf] at 5:10 PM