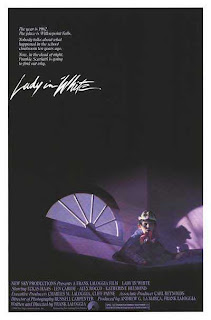 PLOT - LADY IN WHITE mostly takes place in the town of Willowbank Falls in 1962. Frankie Scarlatti (Lukas Haas) is locked in the cloakroom of his 4th grade class on Halloween night by two bullies. Forcing himself to sleep and having bad dreams about his mother's funeral, Frankie is awakened by the presence of a ghost named Melissa (Joelle Jacoby), who seems to know Frankie is watching her and decides to reenact her death in front of him [which happened inside that very cloakroom]. As Frankie watches in terror, he understands that the killer dropped something in a heating duct. Moments later, the real killer appears and attempts to open up the duct inside the cloakroom to find the missing object, knowing that a new school boiler will be installed and the evidence could lead to his arrest. The killer realizes that Frankie is watching him, putting Frankie in danger as the killer strangles him. Losing his life, Frankie has an out of body experience where he meets Melissa, who tells him that she won't rest in peace until he finds her mother, The Lady In White, for her. Frankie somehow survives and realizes he must find this Lady In White to save not only Melissa's soul, but his very own life.

STORY - It's hard to write about this film without spoiling anything. I will say that LADY IN WHITE is a ghost story/mystery/melodrama all rolled up into one. It works really well due to the fact that the main character is a child and its perspective is also very child-like and innocent. It's a film that doesn't try and spook you for the sake that it wants to scare the viewers. It actually tells a pretty deep and serious story about murderous pedophiles, ghosts, struggles of the Civil Rights movement, and just all around family life through the eyes of a child.

We're never lost on our way to unravelling the mystery. While it's pretty easy to pinpoint the pedophile in the film, the build up to it is pretty interesting and we care enough to let the predictability slide due to a strong foundation of characters, who are fleshed out and very sympathetic to side with. In fact, the Scarlatti family are a pretty entertaining bunch, written and directed in almost a slapstick style that only makes this Italian family the more endearing. They act and talk like a real family, which is refreshing in the horror genre. And the journey towards learning about the Lady In White and the revelation of the killer's identity is never boring. In fact for a two hour movie, it felt a lot shorter than that. You're just caught up in the story and that's some good screenwriting for you.

My only beef with the narrative is that it's told as a flashback. This isn't a bad thing at all because it's told really well. However, the film begins with an adult Frankie (played by Frank LaLoggia himself) telling a cab driver the moment he decided to be really serious as a horror writer, which leads into the Lady In White story. Then there are also times where LaLoggia does voiceovers during the story, which are sort of annoying since he tells us exactly what we're seeing on screen. If I can see it, why do I want to hear what I'm seeing at the same time? Those are the worst kind of voiceovers. Also, the film ends when the mystery is solved and the killer is brought to justice. We never go back to adult Frankie after that. What's the point in having Frankie as an adult if you're never gonna follow that sub-plot after the main story is over? It just made the ending feel a bit abrupt and a bit odd. But other than that, the story was well written and well told.

DIRECTION - Frank LaLoggia does a nice job giving LADY IN WHITE an almost surreal feel at times while balancing out the real life events. The film, taking place in the Fall and early Winter of 1962 and 1963, definitely feels like a Fall and early Winter type of movie. It created a nice mood and atmosphere to the film, as the setting was believable and totally matched the story. There was also nice editing and beautiful composition at times, creating tension and suspense - especially towards the end of the film. LaLoggia also knows how to handle the lighter comedic moments without trying, creating a nice balance and some good pacing that never felt off. The special effects, which are really superimposed images acting like ghosts, do look a bit cheesy and corny 21 years after the fact. But it was the 80s and it was a low budget flick. I've seen worse CGI now than I did here, so I'm willing to let it slide. I'm a nostalgic fool, what can I say?

VIOLENCE/SEX/LANGUAGE [aka THE GOOD STUFF] - LADY IN WHITE is a very tame film, meant for families rather than adults. I believe there was no foul language at all in this film. There is a bit of implied sex when it came to the killer, who was a pedophile. We never see anything or even hear stories about what he did. But there's a moment where the killer caresses Frankie in a way that it's a bit uncomfortable. And there is a decent amount of violence, especially towards the end and when someone gets shot in the second act. But other than that, it shouldn't be too horrible to show children.

ACTING - Lukas Haas does a fantastic job as Frankie, creating a real genuine and fleshed out character that we can all root for. Jason Presson, as Gino, was also genuine and quite funny. I actually wanted to see more of his character in the film. Alex Rocco plays the sensitive and caring father perfectly. Renata Vanni and Angelo Bertolini, as the grandparents, were a riot with their sparring. And Katherine Helmond, who is best known as Mona on Who's The Boss?, doesn't do all that much but looks quite scary as the older Lady In White. All that slutting around on that show really aged the hell out of her!

MUSIC - Typical ghost/supernatural score. It worked perfectly with the film.

THE FINAL HOWL
LADY IN WHITE is an underrated and probably overlooked 80s horror film that has a lot of depth and endearing qualities that make it stand out among horror around that time. It's not an exciting movie or all that suspenseful until the end, but its atmosphere and the characters that keep the story moving really make this one worth a watch. I don't think everyone will enjoy LADY IN WHITE, but I think it's a very good film that deserves some attention.